So Moneyball (the movie) is now in theatres, starring Brad Pitt as Billy Frijol (Billy Beane) and Jonah Hill (opting out of a fart joke movie for once) – two small market, front-office baseball guys challenging a century of baseball wisdom in their pursuit of winning ballgames in revenue-deprived Oakland.

The central premise of Moneyball is that the lens through which nearly all baseball men (players, managers, coaches, scouts, front office personnel) viewed the game was subjective at best, irrational and just plain wrong at its worst.

Beane used statistics and uncommon sense to compete with baseball organizations like the Yankees and Red Sox that annually outspent his Oakland A’s by a factor of three.

On the surface the movie (and the book, written by Michael Lewis) is about baseball. But that’s like saying Rocky IV is a movie about boxing. 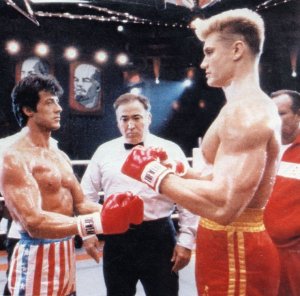 I must break you.

Moneyball isn’t about baseball. It is about 3 things:

As a teenager, Beane was a “Can’t-Miss-Prospect.” Then he missed. As a result, he viewed with skepticism any supposed million dollar high-schooler. The more he investigated it, he found these kids missed all the time. Armed with this insight – paying millions of dollars to a senior in high school carries huge risk – Beane began thinking differently than his peers. He began thinking independently. Somewhat rare in baseball, business – and especially the baseball business.

Through independent thinking, Beane spotted market inefficiencies. While the rest of the baseball world saw a slow, fat catcher with 3 career homers, Beane saw a 4-year starter at a SEC powerhouse who got on base six out of ten times. This dumpy catcher was undervalued in the baseball world.

Lastly, Beane had stones. He had the conviction to experiment based on the independent thinking he had invested in. There was no guarantee the A’s would win based on his strategy. Just the opposite – the A’s rattled off 20 straight wins just to get into the playoffs that year. But they didn’t get anywhere near the World Series.

Mignon McLaughlin said, “The fear of being laughed at makes cowards of us all.”

Beane had no fear of failure or laughter. And that gave him a chance to win.

Bradley Hartmann is founder and el presidente at Red Angle (www.redanglespanish.com), a Spanish language training firm focused on the construction industry. He likes Michael Lewis (his most recent book, The Big Short, is fantastic), Ivan Drago, and thinking independently as least once a quarter.