Home › Construction Spanish › Jobsite Leadership › Why José is Macho, You’re a Soloist and the Swedes are Feminine.

Why José is Macho, You’re a Soloist and the Swedes are Feminine. 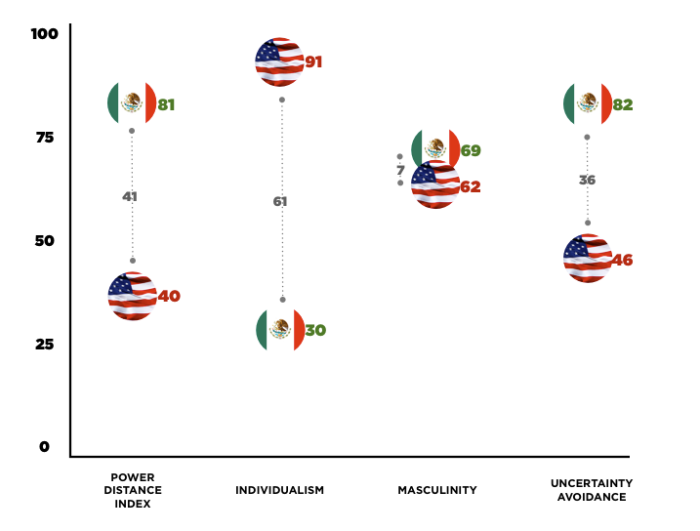 If you’ve spent much time on a jobsite recently, you’ve noticed there are distinct cultures between the Spanish-speaking Workers and the English-speaking Managers. In the majority of cases they pass throughout the day like ships in the night. The language barrier is the most obvious manifestation of the cultural difference, but communication styles stem from culture. If you clearly understand one’s culture, that would make communication much simpler.

Ever wonder how far apart two cultures were statistically? Ever curious about quantifying the difference between two cultures?

Well, you can and someone did. He’s a Dutch character named Geert Hofstede and during a consulting stint with IBM he collected a ton of cultural data from around the globe. The data established his Cultural Dimensions Theory. He characterized the data along four dimensions:

Curious as to exactly how far apart our jobsites are from a cultural perspective, I looked at Hofstede’s data on the US and Mexico. Why Mexico? Well, Mexicans account for roughly 7 out of every 10 Hispanics in the US and in second place is Puerto Rico, with 9%. But Puerto Rico isn’t a country, it’s a commonwealth of the US, so it wasn’t included in Hofstede’s study. (Regardless, don’t make the mistake of assuming all Hispanics are from Mexico.)

We may share a 2000-mile border with Mexico, but culturally, we’re world’s apart. But what does “worlds apart” mean exactly? Read on. Understanding these cultural differences will make your job as a Manager and Leader a lot easier.

Mandatory CYA Disclaimer: As with any analysis regarding large groups of people, statements about cultures are general and relative. Nations are very complex and the goal here is to create a general awareness on the jobsite. Fair enough?

As the name implies, this dimension expresses the degree with to members accept their distance from power. It’s a number that shows how agreeable members are with inequality within the society. A high PDI indicates that individuals understand where they stand in the pecking order and don’t necessarily demand justification for the way things are. A low PDI indicates those in power better be prepared to explain how they got there.

The American Revolution and the Occupy Wall Street Movement are two examples of how Americans aren’t shy when it comes to questioning power. Per the PDI, Mexico is twice as comfortable with inequality. There is an acceptance of the distinct layers of power within society. Mexicans keep their heads down and respect that powers that be.

Of the 66 countries in Hofstede’s study, Mexico ranked #5 on the PDI while the US ranked #52.

This dimension is fairly straightforward. It examines the degree to which members prefer Individualism over Collectivism. 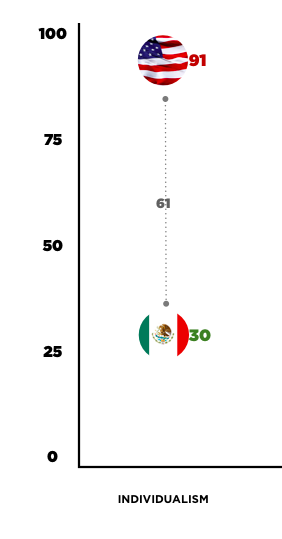 Unsurprisingly, the US scored high in this dimension, ranking the highest among the 66 countries. The American Dream is predicated on Individualism. As a group, Americans aren’t afraid to go it alone. Nothing is impossible. Just Do it.

Mexico leans towards Collectivism, ranking #40 on this dimension. Richard D. Lewis in his book, When Cultures Collide: Leading Across Cultures, cites the Mexican values of Family Closeness, Group Loyalty, and Family Deference.

This is the only dimension of the four where Americans and Mexicans are on the same page. Mexico’s Machismo complex is evidenced in their high score in this dimension, #7 out of 66 countries.

And because I know you are curious: According to Hofstede, Sweden is the most feminine country en el mundo.

This dimension expresses how uncomfortable people are with uncertainty and ambiguity. Countries with high scores maintain rigid codes of conduct. Behavior in high UA countries is consistent. People act accordingly. Countries with weak scores indicate a more relaxed attitude toward acting differently and thinking outside the box.

The US is very comfortable with Uncertainty. This seems a natural fit with our high Individualism Score and our entrepreneurial spirit. Mexico is in the top third of countries regarding Uncertainty Avoidance. They want things clear, concise, and consistent.

Now that we have a better understanding of our cultural differences, here are 2 solutions that you can integrate in 2012 easily and cost-effectively.

As an authority figure, break through the silence and the Power Distance by simply saying hello in Spanish. Try this two syllable introduction:

And I don’t mean using Google Translate. Shell out a few bucks to have it done right by someone who actually works in construction. Incorrect, ambiguous and often hilarious translations are not going to clear up any of the uncertainty on the job (remember the Uncertainty Avoidance Index).

So there. Let’s start the new year off by improving our cultural IQ.