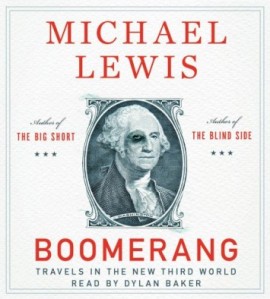 If you aren’t suffering from Bailout Hangover (Ahhh! Why does every country – and California – need a Bailout!?), read Michael Lewis’ latest gift to the humans that read books – Boomerang.

Lewis’ previous book, The Big Short, (along with Moneyball, a couple of the best business books I’ve read), told the story of the US Housing Bubble through the eyes of a small handful of individuals who recognized the madness and placed huge bets on the downfall of the US Economy through Synthetic Collateralized Debt Obligations (CDO’s) and Credit Default Swaps – much easier to type than fully understand…. 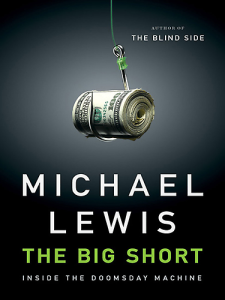 In The Big Short, Lewis makes the complicated mess that is the on-going Economic Collapse easy to understand. In its simplest form, there was a series of bets made about the future of housing. Each bet needed 2 parties. As the mania became more transparent and things started to sour, anyone in their right mind wanted out. Take the losses and move on, but don’t go down with the ship… or Bear Stearns.

But one party kept buying when everyone was selling. One side (or to be more specific, a single city in Germany that became shorthand for the collection of dumb foreign buyers) kept doubling down on its subprime bet: Dusseldorf.

In Boomerang, Lewis travels to Dusseldorf to better understand how the mass default of US subprime borrowers led to the global economic disaster currently being played out in the Euro Zone. It deserves to be pointed out: Of all the countries, Germany appears the most rationale – which is like being the TALLEST midget, but….

Lewis also travels to Iceland, Ireland, Greece, and San José. What is fascinating is the manner in which different cultures dealt with the same temptation: Alone and in the dark with free money, what would you do with it?

Quit fishing and pretend you are a brilliant bond salesman? Build houses for every man, woman, child, and Irish Setter in the country? Enable monks to become real estate magnates?

And equally as fascinating, how do you react when the lights come back on and the dream vanishes – along with the free money?

In the US, Wall Street winners and losers took home millions, Main Street got the bill. In Ireland, the shamed Boom-to-Busters have rotten eggs thrown at their heads by neighbors. In Greece, apparently no one pays their taxes, but they didn’t before the mess either.

Below are some Spanish Skills applicable to Lewis Boomerang:

Bradley Hartmann is founder and el presidente at Red Angle (www.redanglespanish.com), a Spanish language training firm focused on the construction industry. He is a fan (obviously) of Michael Lewis and also strongly recommends reading his first book, Liars Poker.