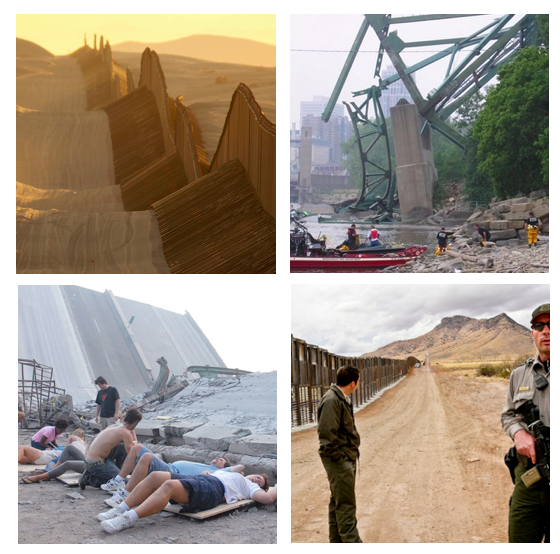 I was eating lunch at Beefaroo yesterday in Rockford, Illinois.

After discussing the pros and cons of naming a restaurant Beefaroo, the Red Angle intern and I got on the subject of her home state of Minnesota.

“You know that Minnesota bridge that collapsed in 2007?”

“A smaller bridge near my home was much worse. It took them another 2 years to do something about it. Yeah… thanks a lot Minnesota.”

The American Society of Civil Engineers (ASCE) estimates that over 10% of all U.S. bridges are structurally deficient.

Is it me… or does that sound like a lot?

To solve the bridge problem by 2028, the ASCE recommends an annual investment of over $20B.

What is currently being invested?

For those scoring at home, that’s 38% less than the recommended allowance.

Why are we trying to address this puente problem by 2028?

What’s the over/under on how many people will die from bridge collapses in the next 15 years?

I’ll get the oddsmakers at Vegas on this right away…

My guess is he’d put the country to work and fix these bridges in 3 years.

And it is, for a slick CEO or a really tall clown like Dwight Howard.

But for bridge repairs?

It’s a mere 0.53% of the federal government’s expenses this year.

In Fortune magazine this month, Sheila Blair noted “the only infrastructure spending Congress seems inclined to authorize is $30 billion to build and man hundreds of miles of fence along our Mexican border.”

$30B on border control when net migration is zero (or negative) while repairing deficient bridges is 38% – or $7.8B – underfunded… and will take another 15 years to fix the bad bridge backlog.

Over the past few years, there have been more undocumented Hispanics heading out than coming in.

Many couldn’t find jobs in the US and went elsewhere. A huge number were deported.

Francis Wilkinson of Bloomberg News recently reported on the “torrid pace of deportations.”

The Obama administration deported 1.5M Mexicans in his first term.

We need to use our heads here.

We need to be rational in our thinking when Washington isn’t.

We need to fix our bridges stat, which will also help put thousands back to work.

We need to quit spending money on border infrastructure. Several decades of experience have proven immigrant resolve for a better life trumps governmental employees with dogs and flashlights.

At Red Angle we speak to our Clients a lot about choosing to build bridges instead of walls when leading and managing Hispanics. These are metaphors.

Given the infrastructure tradeoffs we’re making, we can speak literally as well: we should choose to build bridges instead of walls.

If you’ve enjoyed this post, use it as a digital conversation/argument piece with your friends.