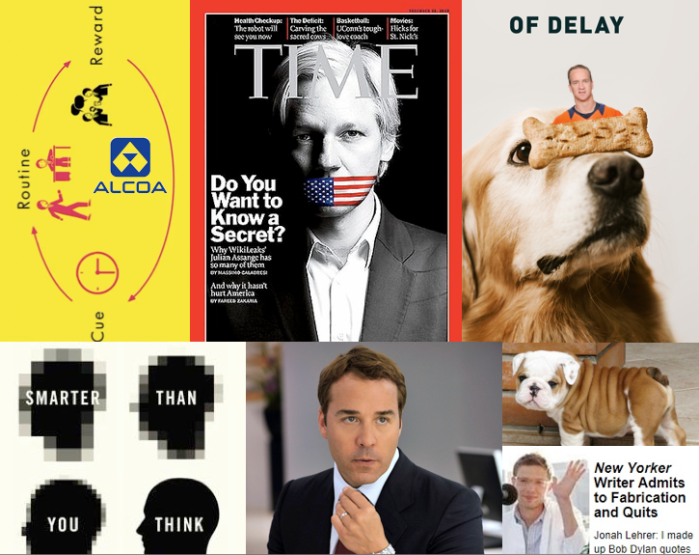 Close, but no cigarillo.

Alas, here’s a brief rundown of the last few books I read – a couple Must-Reads among them….

The reason most of your new 2014 resolutions will forgotten (statistically speaking…sorry) by April 1 is due to habits.

We all have them.

Habits are a shortcut.

Habits are an auto-pilot.

Our lives are largely made up of unconscious habits, but rarely do we strategically design them to our benefit. This book will help make your habits more conscious.

For example, we focus more on goals than habits.

Instead of focusing on goals, “Ok… I will lose 30 pounds by April.” you’d be better served by focusing on habits. “Every Monday, Wednesday & Sunday I will drive to the gym at 7 am without fail.”

That habit – driving to the gym 3x a week – may enable the 30-pound loss goal.

Once you’re at the gym, you’ll know what to do.

The hard part is getting to gym consistently.

Duhigg’s tips on habit awareness and development will help you achieve your goals via habits. The author also shares the greatest workplace safety story I’ve ever read. It involves Paul O’Neill (no – not the baseball one…) and ALCOA. That chapter alone is worth the book’s pricetag.

Wait: The Art and Science of Delay was very good. Partnoy dissects the difference between intelligent/optimal delay and the sinister step-sister, Procrastination. His chapter on personal discount rates is fascinating too.

While you’ve heard some variation of the 3M Post-It Notes story, Partnoy re-tells it with a depth and clarity deserving of its own case study.

After you’ve read The Power of Habit, read this and you’ll be done thinking about thinking for a while….. 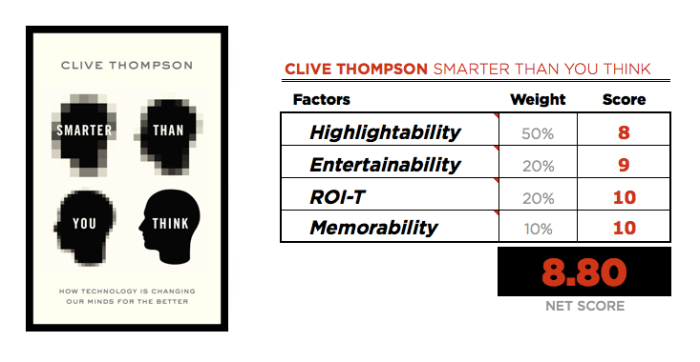 Libro 46 :: Smarter Than You Think by Clive Thompson

“Twitter is for morons who can’t express thoughts longer than 140 characters. The only thing worse than micro-blogging is….”

“Blogging is for journalist-wanna-be’s who are convinced the world will be worse off if we never hear their uniquely original views on Duck Dynasty.”

“Facebook is for attention-seeking stay-at-home moms (and grandmas) with a need to stay relevant. And for businesses. (Like me, please!)”

“Instagram is for narcissists who can barely express their thoughts with a photo and 20 characters.”

With the arrival of every new social media platform comes a familiar cycle:

With each cycle the familiar outcry: Our society is getting dumber! Look at how far we’ve fallen!

Thompson makes a compelling contrarian case for how this new tech is making us smarter.

Thompson says it’s not a binary equation – it’s not either the technology or us.

Sure, Big Blue beat Kasparov at chess and Watson won Jeopardy!, but Siri is still like your 2-year old nephew: It’s cute for a bit, but you don’t want to interact with it for very long.

You should read it.

One becomes a world-renown doctor.

One becomes a Hollywood super-agent.

And one becomes the Mayor of Chicago while living in Washington, D.C.

A bit of both.

In this interesting, but largely benign book on the Emanuel boys – Zeke, Rahm and Ari – written by Zeke, you see the upshot of letting your kids swear, fight, and talk politics, race and religion at the dinner table.

They pick up everything.

The man behind it all is a tall Aussie hacker/vagabond with long blond-hair, a penchant for flamboyance and the occasional rape charge.

If it sounds like a movie, it has become one.

Julian Assange is a character.

This book is excellent, but well within the crowded space of thinking about decision-making (Wait, The Power of Habit, Thinking, Fast and Slow….).

(For better or worse.)

Libro 50 :: How We Decide by Jonah Lehrer

I read this book – which was C+ material – and then remembered why I knew the author’s name.

He’s the guy who made up Bob Dylan quotes for his latest book, Imagine. When he got caught, he doubled down and lied.

And got caught again.

So The New Yorker fired him.

So did Wired Magazine.

Then people started digging… Apparently there were inaccuracies, plagiarism and/or unsavory literary stunts pulled in this book too. It was pulled from the shelves.

But not all the shelves… Obviously.

Bottom Line: Accidentally reading a book you didn’t want to read is a sign the Libro 52 Challenge has run its course.

15. The Greatest Generation by Tom Brokaw

16. The Illustrious Dead by Stephan Talty

17. The Thank You Economy by Gary Vaynerchuk

20. In Cold Blood by Truman Capote

22. Down & Dirty Pictures by Peter Biskind

25. The Business of Belief by Tom Asacker

32. A Very Short Tour of the Mind by Michael Corballis

33. The No Asshole Rule by Robert Sutton

34. Choose Yourself by James Altucher

35. The Halo Effect by Phil Rosenzweig

36. Inside The Box by Drew Boyd and Jacob Goldenberg

37. The Power of Less by Leo Babauta

40. The Authentic Swing by Steven Pressfield

43. The Firm by Duff McDonald

44. The Power of Habits by Charles Duhigg

46. Smarter Than You Think by Clive Thompson

50. How We Decide by Jonah Lehrer