As ICE (Immigration and Customs Enforcement) raids targeting undocumented immigrants increase, Red Angle clients have inquired about steps they can take to protect themselves.

It is an important question given our nation’s reliance on undocumented workers. In conjunction with worker misclassification (treating full-time workers as independent contractors) the workplace represents a reasonable target for an ICE raid.

I first inform my clients I am not an attorney and don’t pretend to be one. However, simple steps can be taken to ensure the firm knows their employees. While the question, “What is your name?” seems simple, naming inaccuracies within the personnel files of your Hispanic employees is where fines—issued per instance—begin to mount.

What follows is an excerpt from Chapter One of my new book, Good to Excelente: How Excellent Companies Embrace Hispanic Cultural Differences to Improve Productivity, Safety, Retention, and Sales. Feel free to share with your team to remove any confusion regarding Hispanic naming conventions.

Why do Hispanics have so many last names?
As a boy, I recall watching the famed golf tournament, The Masters, with my father. It was there I first heard the name of Spaniard José María Olazábal. I had never heard a name like that before.

Hey Dad—why does he have three names?

And why does he have a girl’s name?
Or is “María” his last name?
And if so, where did “Olazábal” come from?

My father told me to be quiet and watch the birdie putt.

Several years later, as I studied the language and culture, these answers were revealed to me. Apart from general knowledge about something extremely personal to people—their last name(s)—understanding Hispanic naming conventions is critically important for business purposes. Namely, proper documentation on employment forms.

When bad things happen (injuries, deaths, Immigration and Customs Enforcement raids, to name a few), minor errors in your record keeping can cost thousands. New-hire paperwork can be lengthy, tedious, and confusing for anyone, especially so for those with different language preferences and limited reading and writing skills.

From I-9 forms to insurance documents to tax filings, your new-hire practices will likely account for some language barriers. For Spanish-dominant workers, I recommend my clients use Spanish application forms with English subtitles. In this way, if the applicant needs assistance, an English speaker can still help while examining the same document.

But let’s not get ahead of ourselves—it all starts with getting the name correct. Let’s return to our two-time Masters champion as an example, whose full name is actually José María Olazábal Manterola.

José is easy enough—it is the Spanish equivalent of Joseph and forms the first part of his first name.

María is the Spanish form of Mary. In this case, María is the second part of a compound first name, tag-teaming with José in tribute to the parents of Jesus Christ: Joseph and Mary—José María. Although this naming convention is not readily used in English (I have never met a “Joe Mary Johnson,” personally), José María is somewhat common in Spanish.

So, José María is his first name.

Manterola, then, is his mother’s last name. For accurate record keeping, both last names are important, so make sure both are included on official records.

New vocabulario for administrators.
English speakers are accustomed to looking at the last last name (that is, the name positioned at the very end) and assuming it is the primary last name.

In our example, it would be logical for an English speaker to look at José María Olazábal Manterolaand think, “There’s not much room on this form. Let’s keep it simple, José Manterola.”

Sharing your assumption with him could be perceived as clueless or disrespectful—or both. What’s more, from a business standpoint, this error could have far-reaching consequences if bad things happen. An excellent HR administrator once told me, “My job is to assume that not only are good things not going to happen, but terrible things are sure to happen.” And if something bad does happen—for example, someone gets injured on the job— and your records aren’t accurate, that could lead to fines or other major headaches.

It is a depressing way to view the world, but a necessity for your colleagues who are responsible for hiring. These individuals on your team should remember the word “penultimate”—second to last.

Do this but not that!
Given the confusion around these naming conventions, Hispanics often deliberately provide their mother’s family name, thinking that is what English-dominant companies prefer for their records.

Thanks for reading. If you’d like to read the first two chapters of Good to Excelente, email me at bradley@redangleinc.com with “Free G2E” in the subject heading. For additional book excerpts, visit goodtoexcelente.com. 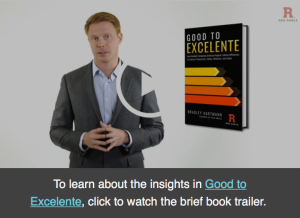 Like Loading...
‹ LeBron, Jordan, and The Backfire Effect
Abs are made in the kitchen: a labor shortage analogy ›